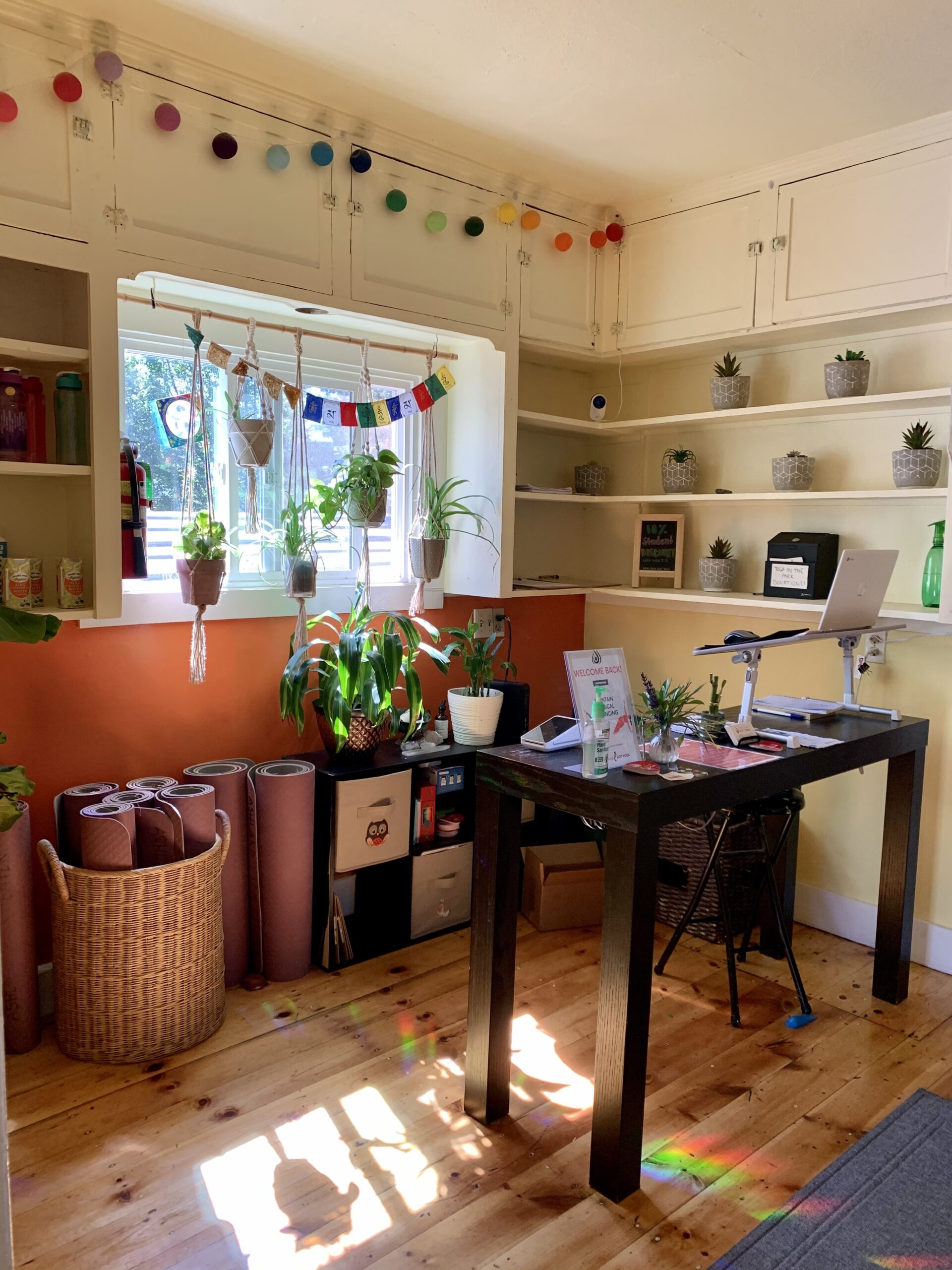 Carlos is a Certified Yoga Teacher, college-graduate Fitness Trainer, and Certified Advanced Qigong Instructor and Internal Martial Arts teacher. He began his formal Mind-Body instruction more than two decades ago in the martial arts field; he then trained in yoga, cardio kickboxing, and other fitness modalities.

He also teaches regular Self-Defense for Women workshops, martial arts sword and broadsword forms, and therapeutic movement for seniors and people recovering from injuries or surgery.

In his yoga practice, he incorporates some aspects of fitness science and physiology, as well as internal energy circulation for building physical strength from the inside out, cleansing and invigorating internal organs for optimal bodily functions, and strengthening the immune system to prevent disease. His classes are based on mind-breath-body harmony and coordination, with emphasis on proper alignment, uninterrupted awareness, and core strength.

Crystal is a mother, partner, traveler, and eternal student of life. Her curiosity about the experience of being embodied has guided her study of yoga from the world of academia to the foothills of the Himalayas.

Crystal holds a master’s degree in Kinesiology (Humboldt State University), a BFA in Dance (Cornish College of the Arts), and several yoga and breathwork certificates. She is completing her 500-hour yoga teaching certificate with Janet Stone Yoga, and she received her 200-hour certificate in 2012 in a training that culminated with in-depth studies in India.

Crystal loves to work with children and in addition to her Child Development Credential (Humboldt State University), she has 2 certificates in kids’ yoga from Next Generation Yoga, as well as a Laughter Yoga Certificate. She has also completed course levels I-V of the Transformational Breath Foundation Facilitator Trainings.

Crystal is a warm and passionate instructor who deeply believes in the transformational potential of yoga. She teaches from the heart and encourages her students with compassion and authenticity.

Zoey Cane Belyea has been practicing yoga and dancing since she was in elementary school and has continuously followed her curiosity about physical expression down many paths. She studied physical theatre in college and is the artistic director of TETHER theatre/dance collaborative where she creates experiences for audiences through movement, poetry, and nature. She works frequently with students, teaching field trips at ScienceWorks Museum and creative writing with Stories Alive. Before moving to Austin, she taught at and managed a barre studio in Austin, TX. She was trained to teach barre in 2016 and brings a blend of dance inspired movement, pilates, and yoga to the studio. Her classes are filled with music, breath, and lots of modifications to help every body achieve strength and grace.

Throughout the almost ten years that yoga has been in my life, the relationship we’ve had has been ever-evolving.
I first tried yoga at fifteen in a PhysEd class in school. Even though it wasn’t exactly love at first sight, I started to occasionally accompany my sister to the classes she would go to nearby. Something that seemed impossible at first became a source of power for me, and so I began to regularly practice by eighteen. Beyond the workout, which is what pulled me in, this practice started to offer me mental and emotional freedom.To practice yoga is not just to exercise and repair, but also to learn. It’s liberating to gain deeper control through that knowledge. Completing my 200 hour training in 2013 with Stray Dog Yoga Studio, I began teaching right away and have been ever since; it’s grounding force that has kept me enticed all along.
As a teacher, I like to emphasize intentions that bring us toward our potential; cultivating the control our bodies have as we move through dynamic, yet intentional sequencing and sly transitions. When our days are stuffed to the brim with rushing and things we can’t control, it’s empowering to be able to come to your mat and see how much you can slow things down and move mindfully.

Oona J Meade has lives with the philosophy that, “Life is Yoga”, having been born into a NW community, on Vashon Island, WA. Where, Health of Spirit, Mind & Body where the values of the community. Growing up Oona’s parents each had their own Yogic Practices, from this inspiration, Oona practiced as a child. She then lost touch with her practice in her teen years. As College and Young Adult beingness came into her experience, she had the gift of reconnecting to a Yogic practice, again.
Oona found connection in her Seattle Yogic Community by having work/trade positions a 2 Yoga Centers. Through this she reconnected & maintained her practice. In 2004 Oona was moved to Ashland, OR, where she took a position @ OSF, in Ashland, OR.
Here she connected instantly with the Yogic Community, allowing her to take part in various projects, such as “The Art of Yoga” & I.willshinealight.org., following her desire to share her practice with others. In February of 2017, Oona committed to her Yogic path, by receiving her RYT(Registered Yoga Training), allowing her to become a guide for this practice that has given so much to Oona.

Mother, teacher, healer and lover of life, Jessica breathes a conscious vitality into every scope of her passions. Her original yoga training started with Bikram Choudhury in 2002, which was a springboard for a lifelong journey of yoga. Trained in many disciplines of yoga since that time.
Jessica has created her own path in human wellness for over 20 years. Through her practice of structural integration, she has the keen sense of alignment. She is also a nutritionist enjoying the combination of all her practices on the mat, with her students, her family and out in the world. Jessica brings a holistic approach to healing with an element of integrity and bliss to every ‘body’!

Mia discovered the practice of yoga over 25 years ago when living in Southern California. Her gentle nature and calm demeanor were challenged greatly growing up in LA, and yoga was the remedy to the stressful pace of life – essential to survival.
Mia has trained with and studied studied yoga through great instructors such as Max Strom, Shiva Rea, Kaliji, Duncan Wong, Djuna Mascal, and Paul Jerard (through whom she gained Yoga Teacher Certification in February of 2007). She found Bikram’s Hot Yoga in 2002 while living in San Diego, and has found this practice foundational in her growth, discovery, and awareness in all areas of life. She is authentic, compassionate, humble, non-judgmental, and respectful of each individual journey on the yoga mat.

After 14 years of practice in the field of Sports Medicine, Wolf felt the pull and answered ‘the call’ that magnetized him towards the art of Natural, Holistic Healing and Shamanic Practices. In heeding the call, a profound awakening began.
Wolf attended school for Naturopathic studies and during this time discovered he is a Light Healer. As such, he worked with a Medium and did energy healing work that assisted deceased spirits to cross over.
Wolf’s light work evolved while he was receiving a “Rising Star” healing at the Agape Spiritual Center. During this session, two of his Spirit Guides – Yeshua & Melchizedek – came forth and delivered a message, “You are to learn this healing modality and Yoga and share them with the world.” These powerful Spirits have guided Wolf and all his work over the past 7 years.
Along the journey, Wolf has been blessed with many teachers. In the first 3 years, he studied with an Abbot of the Renzaiji Buddhist Monastery located in Los Angeles where he advanced his Spiritual practice by taking residence there. During this time, Wolf began working with two unique Shamans that crossed his path in Divine order helping him to connect deeper to his native indigenous roots. In 2015, Lloyd ventured to the Satchidananda Ashram-Yogaville for their ‘Living Yoga’ Internship Program located Virginia. Through these experiences, Wolf discovered a deeper Understanding of the Light within, Truth and its origin.
Teaching the physical practice of Yoga (Asana) was a way to merge his background of Sports Medicine and Spiritual Healing into one. Wolf was guided to Loyola Marymount University and graduated their ‘Yoga and Healing Sciences’ accredited program in 2013, the same year he finished the Hatha program at Hot 8 Yoga.
Wolf’s enthusiasm for healing infuses his Yoga teachings. He teaches Hatha based classes focused on foundational alignment and connection within. His classes are designed to not only advance your practice physically, but to tap into the emotional, mental and energetic bodies. He completes his classes with sound healings and meditation techniques. Wolf’s classes have been described as, “Healings… sprinkled with yoga”.
Wolf’s certifications are: 200-RYT from Loyola Marymount University and 200-RYT Hatha Yoga through Hot 8 Yoga.

I have been practicing yoga for roughly 15 years  and have been teaching for the past 5 years. The first class I ever walked into was was right here in Ashland at the Siskiyou studio so, it is so cool that life has brought me full circle to not only practice but to teach at this beautiful studio.
My 200 hour training was in vinyasa, a dynamic breath and body connection. Shortly after, I decided to compliment that fiery practice with 50 hours of training in Yin Yoga. I consider myself a student of yoga first and foremost and teaching is something that fulfills me so much with the connections that are made inside the studio. Yoga is a life long path and it is my privilege to be able to share in people’s practices.

Certified Bikram Yoga Instructor
Christine loves helping others live a vibrant, healthy, happy life through yoga, Ayurveda and the other modalities she practices. Originally from the East coast of Canada, with a Bachelor of Commerce from Saint Mary’s University in Halifax, Nova Scotia, she left New Brunswick with her backpack and traveled around the world from Europe to Australia to South-east Asia for 18 months. After settling in London, England for a few years, she started practicing yoga in 1996.
The first yoga school she attended was Sivananda Yoga in Putney. She then discovered Ashtanga yoga and studied with many original Ashtanga yogis such as Radha in Crete, Greece, Lino Miele and John Scott. She became a certified Pilates instructor in 2002 after moving to Vancouver, BC.
Wanting to merge her business and fitness backgrounds, she created a women’s fitness franchise, Aradia Fitness, in 2003. Christine and her business partner then brought Aradia to Las Vegas in 2007.
In Las Vegas, she began a regular practice of Bikram Yoga, and, being amazed at the rejuvenating and healing benefits, she became a certified Bikram Yoga instructor in the fall of 2009. After teaching Bikram Yoga briefly in San Diego, she purchased Bikram Yoga Memphis in October, 2010, where there are now 3 Bikram schools.
While exploring some health issues, she discovered Ayurveda and became an Ayurvedic Practitioner after attending The Ayurveda Institute with Dr Lad, from 2012-2104.
She became an Inferno Hot Pilates Instructor in 2015, which became an instant hit at the Memphis studios. She is also a PSYCH-K® facilitator, which helped with her transition from yoga studio owner to HR Manager at Banyan Botanicals.
Her love of learning alternate ways of healing lead her to Japan in Oct 2018 to study with Dr Emoto’s son, and is now a Hado Instructor and owner of the Kazutama System, to help people heal at a vibrational level. She is currently in the process of researching and setting up an adult sleep coaching program along with helping those with thyroid issues.